Jacqueline Jung, who has taught at Yale since 2007, specializes in the art and architecture of the medieval West, with an emphasis on the figural arts of Gothic France and Germany.  Her teaching has thus far encompassed the history of medieval sculpture; images of death and apocalypse; Gothic cathedrals; the body as medium and matter in the Middle Ages; monumental narrative arts; late medieval altarpieces; visions and visionary experiences in art; the representation and stimulation of emotions in medieval art; and the importance of materiality, movement, and space in medieval visual culture. 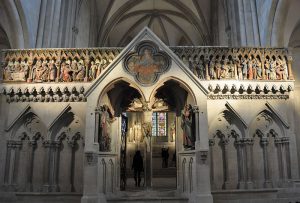